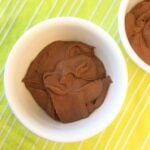 This is a quick and easy low carb chocolate mousse with just 5g net carbs per serving.

1.  Cook chocolate chips and 1/4 cup whipping cream in a small saucepan over low heat until melted and combined.  Transfer it into a small bowl and put it in the refrigerator to chill.

2.  Make the whipped cream topping next.  In a large bowl, beat together 1/2 cup whipping cream, 1 tablespoon powdered sweetener and 1/4 teaspoon vanilla with an electric hand mixer until stiff peaks form.  Transfer to a small bowl and put it in the refrigerator.

3.  In the large bowl, beat 1 cup whipping cream and 1/4 cup powered sweetener until stiff peaks form.  Add in softened cream cheese and beat until it is fully incorporated and fluffy.

5.  Divide the mousse into 4 small ramekins.

6.  Chill for 30 minutes in the refrigerator before serving.  Top each ramekin with whipped cream.