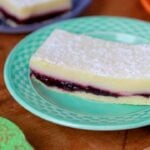 These low carb and Keto blueberry lemon bars will brighten your day.  They are easy to make and only have 2g net carbs each.

1.  Pre-heat oven to 300 degrees F and cover an 8 x 8 inch baking pan with parchment paper.  Cut two sheets of parchment paper and crisscross them in the pan so that you can lift the bars out once they have cooled.

2.  In a medium sized bowl, mix together all crust ingredients.  Press the dough into the bottom of the baking pan in an even layer.  Use a fork to press holes into the dough so that the air can escape.  Bake for 18-22 minutes until center is firm and edges are just beginning to brown.

3.  While the crust is baking, you can mix up the blueberry layer.  Add blueberries to a medium sized sauce pan and cook over Medium Low heat until liquid is released, stirring frequently.  Bring liquid to a boil and stir in 3 tablespoons sweetener.  Sprinkle 2 teaspoons xanthan gum over the pan and quickly whisk it in.  Simmer for 2-3 minutes until thickened.  Pour blueberry filling on top of the crust and smooth it out from edge to edge with a spatula.  Refrigerate for 1 hour.

4.  After the pan goes into the refrigerator, mix up the lemon layer.  Either wash out the sauce pan you just used, or use a new one.  In a small bowl, mix together 2 tablespoons water with the unflavored gelatin.  Set aside to soften.

5.  Add 1 cup water, 1 cup sweetener, lemon zest and salt to the sauce pan and cook over Medium heat until sweetener is dissolved and liquid is just beginning to simmer.

6.  Whisk together egg yolks in a small bowl.  Quickly whisk in 1/2 cup of the hot liquid to temper the eggs.  Whisk the egg mixture back into the pan.  Cook for 1 minute, stirring constantly.

7.  Stir in lemon juice and butter and stir until butter is dissolved and mixture is smooth.

8.  Sprinkle 1/2 teaspoon xanthan gum over the pan and quickly whisk it in. Simmer until thickened, 2-3 minutes.

9.  Stir in softened gelatin and mix until fully dissolved.  Remove from the heat and pour the lemon mixture into a medium sized bowl to cool on the counter until the crust is done chilling.  If a skin begins to form, just stir it back in.

11.  Chill in the refrigerator until firm, 3 hours.  Use a sifter or sieve to sprinkle powdered sweetener evenly on top of the blueberry lemon bars.

12.  Store in the refrigerator.

*If you take these bars to a party, make sure to clearly mark that they contain nuts.  Most people don’t expect a dessert bar to use almond flour, so people with nut allergies might inadvertently eat it.