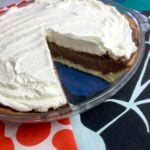 This Keto Chocolate Cream Pie is a decadent dessert with just 8g net carbs per slice.

4.  Using your fingers, press the dough into the bottom and sides of a pie pan, as you would a crumb crust.

5.  Using a fork, poke small holes throughout the crust.

10.  Reduce to simmer for 1-2 minutes until it thickens like a pudding.

11.  Remove from heat and add chocolate chips. Stir until smooth. Set aside.

12.  Add the eggs, egg yolks and vanilla to a large bowl and blend with an electric mixer until smooth..

14.  Pour into prepared pie shell and cover the crust edges with aluminum foil so they don't burn.

17.  Whip the cream and sweetener with an electric mixer until stiff peaks form. Cover the top of the chilled pie with the whipped cream.