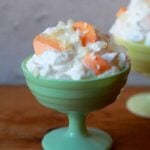 Step 3.  Add egg whites to a large bowl.  Use an electric mixer set on Medium-High to whip the egg whites until soft peaks form, 1-2 minutes.

Step 7.  Use a whisk to beat the hot Jello liquid into the egg whites.  Scrape the sides and bottom of the bowl and mix until fully combined.

Step 8.  Pour the mixture into the prepared pan and chill in the refrigerator for 1 hour until firm.

Step 9.  Remove the gelled mixture from the pan with a pancake turner and place on a cutting board.  Either cut into 1 inch squares or use a 1 inch circular cookie cutter to cut into circles.  Cut the circles in half to look like orange slices.

Step 10.  In a large bowl, use an electric mixer on Medium-High to whip together 2 cups heavy whipping cream and 1/4 cup powdered sweetener until stiff peaks form, 3-4 minutes.

Step 12.  Fold the orange marshmallows into the whipped fluff, holding back a few to add to the top as a garnish.

Step 13.  Store in the refrigerator until ready to serve. 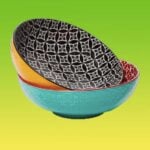