These Keto Dumplings are out of this world. And they are made from Fathead dough so they only have 7g net carbs per serving.

Good news.  Today I’m going to share one of the tastiest recipes on my site.  It’s a recipe for Asian Dumplings, AKA Potstickers, AKA Gyoza. I don’t care what you call them, just as long as you call me for dinner.

Origin of the dumpling 🥟

Every culture has some form of dumpling, but they originated in China at least 1,800 years ago.  Legend has it that they were invented as a somewhat cockamamy cure for frostbite.

One cold winter during the Han Dynasty, a fellow named Zhang Zhongjian noticed that many of the people in his village were suffering from frostbite.  So he decided to try and cure them with good food.

He mixed up a filling of mutton, chili, and healing herbs, and wrapped them in scraps of dough.  He shaped the dough like little ears, maybe because that was where people got frostbite?  Unclear.  But he handed the ear-shaped treats out to his grateful neighbors and the rest is history.

That is just a fact.  The dough is made of just white flour and water, and we low carb dieters can only eat one of those ingredients.  But fear not my Keto friends, we can use a mixture of almond flour, cheese, butter, and eggs to make a very good imitation of dumpling dough.

It sounds weird, but tastes good.

The epic battle rages on.  In case you are a coconut aminos newbie: it’s a dark sauce that tastes very similar to soy sauce.  But instead of being made from wheat and soy, it’s made from the sap of the coconut plant.  The sap is fermented until it has a nice rich salty flavor.  This faux soy sauce is lower in salt, and can be eaten by people who eat gluten-free, wheat-free and soy-free.

Soy sauce has wheat in it?

Yes, wheat is actually the main ingredient in soy sauce, which came as a bit of a shock to me.  It’s made from soybeans, wheat, salt and a fermenting agent. The sugar is eaten up in the fermentation process, but you know, it's still made from wheat. So while it is technically low in carbohydrate, if you are a Keto stickler, you may want to go with the Coconut Aminos. But if you only have soy sauce in the fridge, then just use that.

You can either use ground pork or ground chicken in these Keto Dumplings. You'll need to brown the meat before you wrap it in dumpling dough because the filling won't be cooked through if you don't.

If you want to go vegetarian, you can skip the ground meat and saute some carrots and shitaki mushrooms in with the cabbage, scallions and garlic. You can also use tofu that has been chopped small and sauted with the vegetables.

For the dipping sauce:

You’ll be cooking up a Fathead dough, filling it, and then frying it in a pan. That last part is tricky because you are using a dough made from cheese, so it’s always a bit precarious.

But it’s nothing you can’t handle my dumplings. 😉 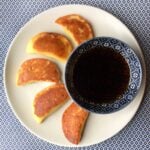 These Keto Dumplings are out of this world. And they are made from Fathead dough so they only have 7g net carbs per serving.

Step 1.  In a large bowl, mix together the minced cabbage, garlic, ginger, scallions, ground chicken or pork, egg, Better Than Bouillon, salt, pepper, almond flour, and coconut aminos. Knead the meat mixture with your hands until all of the ingredients are smoothly mixed together.

Step 2.  Add 1 tablespoon olive oil to a large frying pan. Cook the filling on medium heat for several minutes until fully browned and cooked through. Remove from heat and add to a bowl to cool.

Step 3.  Microwave the butter and mozzarella cheese for the dough on High for 1 minute. Stir and cook for one minute more. The cheese and butter should be melted and able to be combined. If you need to, add a minute or two more.

Step 4.  Allow the cheese to cool for 2 minutes and then mix in the egg and egg yolk. Mix until smooth.

Step 5.  Mix in the almond flour to form a soft dough. Knead a few times to make sure that the dough is fully blended.

Step 6.  Place the dough between 2 pieces of parchment or wax paper. Roll out the dough until it is quite thin, about ⅛ of an inch. Use a circle cookie cutter or a glass to cut 3 ½" circles out of the dough. Ball up the remaining dough and repeat the process again.

Step 7.  Drop a tablespoon of filling on each circle of dough. Carefully fold the dough in half and seal the edges by pressing down with your fingers.

Step 8.  Wipe down your frying pan. Add 1 tablespoon olive oil and 1 teaspoon sesame oil and heat the pan on medium.

Step 9.  Add the potstickers to the pan in batches, 9 or so at a time. Brown on both sides, 1-2 minutes on each side. Just remember that the dough is made of cheese, so you need to handle it very gently when it's hot.

Step 10.  Whisk the dipping sauce ingredients together and serve.

To make vegetable dumplings, replace the ground meat with 2 medium carrots and 8oz of mushrooms, sliced thinly.  Saute with the cabbage and scallions and then continue with the recipe.

If you liked this low carb Chinese appetizer recipe, then you might like my recipes for Egg Drop Soup, Cabbage Wrapped Dumplings or Scallion Pancakes.