These healthy Keto Cinnamon Sugar Donut Holes are easy to make in an air fryer. And each donut hole has just 1g net carbs.

Hope your morning is going well.  I’ve spent mine happily experimenting with my new air fryer.  If you don’t know about them, air fryers are these magical machines that fry food using only air.  It’s a far healthier and less messy way to fry foods.  So for my first foray into air frying, I thought I’d start with something that I love, but that is a total pain to fry the normal way.

Donut holes to be exact.

You get the idea.

But I am going to be honest with you, I taste tested waaaayyy too many Donut Holes this morning.

I gobbled up the first couple whole because they were so delicious.  But now I really wish I had paced myself.  I finally found the perfect combo of butter and cook time, but now I am stuffed to the gills with these addictive cinnamon sugar donut holes.

But onwards and upwards with these devilishly addictive treats .

They are made from real yeast bread dough, so you’ll need to proof some yeast, mix up your dough, knead it and then let it rise before cooking it in the air fryer. But you can still do it all in less than an hour.

And soon you'll have some lovely Keto donut holes with only 114 calories and 1g net carbs each.

I used Carbquik Baking Mix for this recipe.

It's a low carb flour mix that is meant to replicate Bisquick. And it actually does act quite a bit like real flour.  It’s made from wheat, but they’ve converted most of it to fiber to bring the net carb count down to nearly nothing. If you are an absolute Keto diet stickler, then you may want to move on to another donut hole recipe.

But if you are like me, and are doing "Lazy Keto" then you are all good.

Now, a word of warning.

You are going to see sugar in the ingredients, but hold up a minute before you pass judgment.  The sugar is needed to feed the yeast.  But it’s converted to alcohol and carbon dioxide in the fermentation process, so the carbs are canceled out.  You should also know that since the Carquik is made from wheat, it’s not gluten-free like most other low carb and Keto baked goods.  So, just a word to the wise.

But enough chit chat, now I have a date with some Pepto-Bismol. 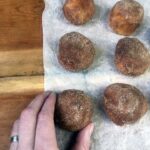 These healthy Keto Cinnamon Donut Holes are easy to make in an air fryer. And each donut hole has just 1g net carbs.

Step 1.  In a  large bowl, mix together warm water, sugar, and yeast.  Cover the bowl with a towel and allow to rest for 7 minutes until frothy with small bubbles.  If it isn't frothy like the head on a draft beer, then your yeast is dead and you need to start over with fresh yeast.

Step 3.  Either use the dough hooks on the stand mixer or your hands to knead the dough for 3 minutes.

Step 5.  Allow the dough balls to rise for 15 minutes.  They will not rise a lot, but you'll be able to tell that they are a bit bigger.

Step 6.  While they are rising, set your air fryer to 350 degrees F and preheat it for 10 minutes.

Step 7.  Brush four of the dough balls with melted butter on all surfaces and place them in the basket of the air fryer.  Air fry at 350 degrees F for 10 minutes.

Step 8.  Remove the donut holes from the air fryer and set them aside to cool a little bit.  Repeat the process with the remaining dough balls.

Step 9.  Once the donut holes are cool enough to touch, brush them again with melted butter on all surfaces.

Step 10.  Mix together cinnamon and sweetener in a medium-sized bowl.  Roll the donuts in the cinnamon mixture until coated on all sides.

Step 11.  Best when eaten warm.  Can be reheated in the microwave for 10 seconds to soften them back up.

*The sugar will be converted to alcohol and carbon dioxide in the fermentation process so the carbohydrates are canceled out. The sugar has been left out of the nutritional info.