This recipe for Keto Powdered Chocolate Donuts is nice and chocolaty.  And these low carb mini donuts have just 1g net carb each.

“As you go through life make this your goal: Watch the doughnut, not the hole.”

Today I’m going to share a Keto Powdered Donut recipe and tell you the story behind the invention of the donut. So gather round me mateys, and I'll tell you the tale of how the donut got its hole.

The origin of the donut:

Modern day donuts can be traced back to New England in the mid 19th Century.

A sea captain was eating a piece of fried bread made by his mother on a dark and stormy night out at sea. All of a sudden, he needed the use of both of his hands in order to steer the ship, so without thinking, he impaled the fried bread on the handle of the ship’s wheel. Luckily, through his fast thinking, he sailed the ship out of danger. Once he had his wits about him again, he realized that putting a hole in fried bread was a very handy thing to do, and passed the idea on to his seafaring friends.

One thing lead to another and now donuts are enjoyed by young and old alike.

But are they Keto friendly?

No, donuts are in no way friendly to Keto dieters. Regular store bought donuts are undoubtedly delicious, but they are made from white flour dough and loaded with sugar.  Each donut has got around 300 calories and between 30-40 grams of carbohydrate. So, if you are on a Keto diet, donuts are strictly forbidden. No wiggle room there.

But fear not, this donut recipe is ever so Keto.

The batter is a mixture of:

How do you make them?

You just bake the batter up in a donut mold and then coat the donuts in powdered erythritol.

And that's all there is to it.

The result is a Keto Powdered Chocolate Donut that is low carb, grain free, sugar free and gluten free. It is all of the best frees.

And so, in the immortal words of Homer Simpson, “Mmm forbidden donuts”. 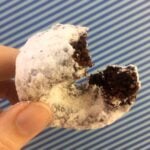 This recipe for Keto Powdered Chocolate Donuts is nice and chocolaty.  And these low carb mini donuts have just 1g net carb each.

3.  Add melted butter to dry ingredients and stir until absorbed.

4.  Add the eggs, vanilla extract and milk and stir until smooth.

5.  Spoon into the wells of prepared donut pans.

6.  Bake for 10 to 15 minutes. Donuts are done when the top springs back when touched.

7.  Remove and let cool in the pan for 10 minutes, then flip out onto a wire rack to cool completely.

*If you take these donuts to a party, make sure to clearly mark that they contain nuts.  Most people don’t expect donuts to use almond flour, so people with nut allergies might inadvertently eat one.

If you liked this low carb donut recipe, then you might like my recipes for Double Chocolate Donuts, Lemon Donuts, or Pandan Donuts.