This Gluten-Free Chocolate Swiss Roll recipe has only 2g net carbs and 166 calories per slice.  It’s a sugar-free celebration of chocolate.

I am really looking forward to finishing this blog post and digging into today's Gluten-Free Chocolate Swiss Roll.  And with 166 calories and no gluten whatsoever, I can eat it guilt-free. Sweet!

What are Swiss Rolls? 💬

Swiss Rolls, also known as Roulade, are light sponge cakes filled with jam or cream and rolled into log shapes.  They have a lovely spiral pattern when you cut them into slices.

Where are Swiss Rolls from? 🇨🇭

They come from Switzerland, that much we know.  But the origins of this roll cake are murky.  It was invented in the 19th Century by either the English or the Austrians.  The English were truly there for it and brought the Swiss Rolls to countries under the influence of the British Empire.

But when you think of Swiss Rolls, you probably think of the Little Debbie Swiss Cake Rolls of your childhood.  These handheld roll cakes were a lunch box essential back in the day.

Classic Swiss Rolls contain white flour, which contains gluten, so they aren’t gluten-free.  But the recipe I’m going to share today is made from just eggs, cocoa powder, and sweetener, so it is a great gluten-free alternative.

Yes, it is.  The recipe uses an erythritol sweetener called Swerve, so it’s sugar-free as well as being low carb and Keto.  You can find this zero-carb, zero-calorie sweetener in health food stores and on Amazon.

Where to buy Swerve 💰 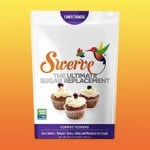 And for the cream filling, the ingredients are:

Soon you’ll have a tasty Gluten-Free Chocolate Swiss Roll with only 166 calories per slice. Now all you need is an occasion to celebrate with this chocolate cake. 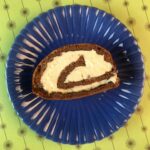 This Gluten-Free Chocolate Swiss Roll is a light and airy dessert with only 166 calories and 2g net carbs per slice.

Step 1.  Preheat the oven to 350 degrees F and cover a 10 x 15-inch cookie sheet with parchment paper.  Spray the parchment paper with cooking spray and dust it with a little cocoa powder.

Step 2.  In a large bowl, whip the egg whites with an electric mixer until stiff peaks form.

Step 4.  Fold the egg whites into the cake batter.

Step 5.  Pour the batter onto the cookie sheet and spread it out to fill the whole surface.  Bake for 20 minutes.

Step 6.  Remove from the oven and carefully cut around the edge of the cake.  Allow to cool for 10 minutes.

Step 7.  Lay out a clean tea towel and sprinkle ¼ cup cocoa powder onto the surface of the towel.

Step 8.  Invert the cake onto the cocoa-covered towel and peel off the top piece of parchment paper. Roll up carefully inside a towel and let it cool while you make the filling.

Step 9.  In a large bowl, beat the whipping cream with an electric mixer until stiff peaks form.

Step 10.  In another large bowl, beat together the cream cheese, sweetener, salt, and vanilla until smooth.

Step 11.  Using a spatula, fold the whipped cream into the cream cheese mixture.

Step 12.  After the cake has cooled for at least 20 minutes, unroll the cooled cake from towel, spread on the filling, and roll the cake back up.