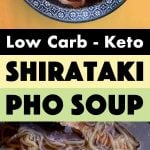 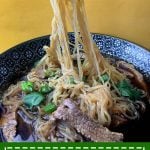 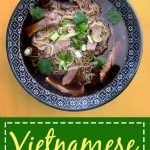 Today I’m going to share my recipe for quick Keto pho.  It’s a classic Vietnamese noodle soup that I know should be pronounced “fuh” like fun, but my heart still wants to pronounce “foh” like phone.

My son was home sick from school today, so we shared a noodle soup lunch. Our diets are very different, his and mine.  He had classic Mrs. Grass’s chicken noodle soup and I had the bowl of Keto pho that you are looking at.  We each thought we had the best soup.

It’s because this Keto pho turned out really well

I made a simplified version of a quick pho recipe that I found on the Kitchn.  Authentic pho is an all-day affair where you make the special infused broth from scratch.  If you want to go that route, here is a great recipe from Jen Reviews.

🍜 How to make Keto pho broth

You can get very close to authentic pho broth by infusing store-bought beef broth with the same aromatics. To make this Keto pho broth, you mix beef broth with onion, fresh ginger, cinnamon sticks, coriander seeds, fish sauce, and soy sauce or coconut aminos.   You bring it to a boil and then simmer the broth for 30 minutes.  Pour the broth through a sieve to remove the aromatics and you’ll have yourself some very passable Vietnamese pho broth.

I used low carb shirataki noodles for this pho recipe.  Shirataki noodles are made from a strange root that cannot be digested, so they have zero net carbs per serving.  Odd but true.  They don’t taste like much of anything on their own, so this flavorful soup is the perfect use for them.  With that one small change to the recipe, the net carb count for this soup went from 70g all the way down to 3g.

So to make up the soup, you split your shirataki noodles between 4 large bowls.  Top the noodles with thinly sliced strips of sirloin steak and then pour the hot broth into the bowls to cook the meat and heat the noodles.  Then top each bowl with sliced scallions, cilantro, and lime juice.

You just need a short list of ingredients and 40 minutes to make this tasty Keto Beef Shirataki Noodle Pho Soup.  And each bowl of this Vietnamese soup has just 241 calories and 3g net carbs.  So it’s a wonderfully flavorful bowl of noodle soup that you can eat guilt-free on your low carb diet. 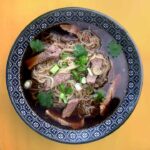 Step 1.  Mix together all broth ingredients in a large stock pot. Bring the broth to a boil over medium-high heat, then reduce the heat to medium-low. Cover and continue simmering for 30 minutes to give time for all the spices and aromatics to infuse in the broth.

Step 3.  Remove the beef from the freezer and immediately use your sharpest knife to slice the beef into very thin slices. Slice across the grain, and aim for slices no thicker than ¼-inch. Once sliced, keep the beef covered and refrigerated until ready to serve.

Step 4.  Add the shirataki noodles to a colander and rinse with warm water.

Step 5.  After the broth has simmered for 30 minutes, strain out the aromatics with a sieve.  Return to the soup pot.  Place the broth back over low heat and keep it just below a simmer — you should see a fair amount of steam, but the broth should not be boiling. The broth needs to be quite hot to cook the beef.

Step 6.  Divide the rinsed noodles between 4 serving bowls and top with a few slices of raw beef.  Arrange the beef in a single layer so that the slices will cook evenly in the broth.

Step 7.  Ladle the steaming broth into each bowl, pouring it evenly over the beef in order to cook it. The beef should immediately start to turn opaque.

Step 8.  Top each bowl with scallions and cilantro and squeeze 1 quarter lime into each bowl.  Set out the hot sauce, if using.

If you liked this shirataki noodle recipe, then you might like my recipes for Spaghetti and Meatballs, Keto Ramen or Baked Ziti.