This is a quick New England Style Keto Clam Chowder recipe with just 10g net carbs per serving. It's a creamy festival of fish.

Today I made a big pot of Keto Clam Chowder, so naturally, I'm thinking about the Soup Nazi from Seinfeld.  He was, of course, the purveyor of the best soup in Manhattan.  But he was very picky about this customers. If you upset the Soup Nazi, there was no soup for you.

But chowder, let’s discuss it.

As you may or may not know, a chowder is a soup made from seafood, with a milk or tomato base.  It usually includes vegetables like potatoes, onions, celery and carrots as well as small pieces of bacon.  And while any kind of seafood can go into a chowder, the most poplar fish to use is clams.

The soup originated in New England in the 1700’s, where it was made to warm you up and stick to your bones.

What is the difference between Manhattan, Rhode Island and New England Clam Chowder?

New England Style Chowder is cream based and uses potatoes, onions, celery and clams.  Manhattan Style Chowder has a tomato broth base and in addition to the potatoes, onion and celery, it might have green peppers and carrots.  And last but not least, you have your Rhode Island Clam Chowder, which has a thin broth base that may or may not involve tomato sauce.  It includes the same kinds of vegetables, but uses quahog clams instead of the classic clams you can buy in a can.

And all three chowders can have bacon in them because…bacon.

Traditional clam chowder is close to being Keto, but the high carb potatoes are a deal killer.  But not to worry, the Keto Clam Chowder recipe that I am going to share with you today swaps out the potatoes with daikon radishes, so the carb count is just 10g net carbs per bowl.

What are the ingredients in this Keto Clam Chowder?

How do you cook Keto Clam Chowder?

And that’s all she wrote.

It takes about 40 minutes to whip up a pot of Keto Clam Chowder that has only 360 calories and 10g net carbs per bowl.

So here you go, some soup for you! 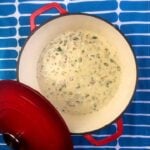 This is a quick low carb New England Clam Chowder with 10g net carbs per serving.

If you liked this low carb soup, then you might like my recipes for Gumbo, Tomato or Ramen Noodle Soup.