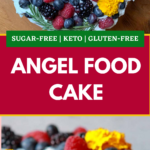 This Keto Angel Food Cake recipe is absolutely heavenly. And each slice of this angelic sponge cake has just 58 calories and 10g net carbs.

Before we begin, I need to give you fair warning.  This recipe for Keto Angel Food Cake is very difficult to make.  It has a meringue batter, so it is fraught with danger.  You may do everything right, but a butterfly flapped its wings in Paraguay, and as a result, your cake fell.

No need to trouble yourself with Angel Food Cake. I’ve got some lovely Keto cake recipes on the site. My Toasted Almond Torte, Lemon Pound Cake and Chocolate Lava Mug Cake all have very high rates of success. If you give up now, I won't blame you.

But if you insist on going forward, let's talk ingredients.

🎂 The right pan to use

🥚 How to whip the eggs

😋 Cutting and eating the cake

How many net carbs are in Angel Food Cake?

Regular Angel Food Cake is actually lower in carbs than other cakes because it contains less flour. So a slice of everyday Angel Food Cake will run you about 40 net carbs. But the recipe I am sharing with you has just 10g net carbs.

This one sure is! Because it uses a small amount of arrowroot starch and no sugar at all, it is very diabetic friendly. It is unlikely to cause any spikes in blood sugar.

Can I use Cool Whip instead of making whipped cream?

Sure, Cool Whip is a secret weapon of the low carb dieter because it has just 2 grams of carbohydrate per serving. And its cousin Reddiwhip has just 1g of carbs. Steer clear if you are doing strict Keto though, because there are some unsavory chemicals involved.

If you make it through the gauntlet, you’ll have a very special sponge cake.

It’ll taste like normal Angel Food Cake, only this one will have just 58 calories and 10g net carbs per slice.  This healthy Keto Angel Food Cake makes a beautiful centerpiece.  And with the proper garnishes, it’ll look so good that your friends won’t want to cut it up and eat it.

But they really should, because the taste is just... heavenly. 👼 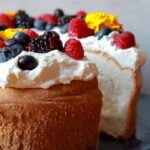 Step 3.  In a medium-sized bowl, sift together ¼ cup sweetener and 1 cup arrowroot starch.

Step 4.  In the large mixing bowl, use a stand mixer or an electric mixer to beat the egg whites on medium-high speed until foamy, 30 seconds.  Keep the speed at medium-high for the rest of the recipe.

Step 7.  Slowly beat in arrowroot mixture, ¼ cup at a time, until smooth.

Step 10.  Immediately invert the angel food cake pan.  Air needs to be able to circulate around the pan as it cools.  If the pan has legs, do nothing, but if not, hold the pan above the counter, using a bottle or can.  Cool for 1 ½ - 2 hours until completely cooled.