“Start spreading the news.  I’m leaving today.  I want to be a part of it, New York, New York!” – Frank Sinatra

I made a Keto New York-style cheesecake yesterday, so naturally, I’ve had the late great Frank Sinatra’s “New York, New York” stuck in my head.  I’ve been belting it out just like Ol’ Blue Eyes used to do.  There is really no other way to sing it. You have to go all in.

It takes 12 hours from start to finish, so you really need to commit to it. It takes such a long time to make because you have to cook the pumpkin cheesecake for several hours at a very low temperature to get that velvety New York Style cheesecake texture.  Then you need to slowly cool it down for 2-3 hours until just barely warm. And finally, you chill it in the fridge until it’s completely cold and firm.

But let’s back up.  What is a New York Style Cheesecake?

I think that Cook’s Illustrated put it best in their American Classics cookbook: “[It is] an orchestration of different textures and an exercise in flavor restraint, New York cheesecake should be a tall, bronze-skinned, and dense affair. At the core, it should be cool, thick, satiny, and creamy; radiating outward, it goes gradually from velvety to suede-like, then, finally, about the edges, it is cake-like and fine-pored.”  New York-style cheesecakes have a lot to live up to, that’s for sure.

So when I was creating today’s Keto pumpkin cheesecake recipe, I went right to the source:  Cook’s Illustrated.

Their crack team of test cooks tackled the most basic cheesecake problems and came up with a genius solution.  Normally, you cook this kind of cheesecake by baking it in a very hot oven, then turning off the heat and letting it cool down for several hours.  There is often a messy water bath involved.  But the problem with this method is that ovens vary widely from model to model in terms of how quickly they come down to room temperature.

And because of this, you’ve got 4 ways that cheesecakes can go South.

So how do you avoid these cheesecakey problems?

The folks at Cook's Illustrated turned the way this cheesecake was made on its head.  Instead of starting out at high heat and slowly letting it cool, they cooked the cheesecakes in very low heat for 3 - 3 ½ hours and then upped the temp to 500 degrees F and cooked the cheesecake for 4 - 12 minutes until nicely browned.  So they bypassed the problems of uneven cooking temp and reduced the chances of falling into one of the 4 deadly cheesecake sins.

So that brings me to the low carb and Keto pumpkin cheesecake I’m going to show you how to make today.

This epic sugar-free cheesecake has two lovely layers, one vanilla and one pumpkin.  It’s crustless, which keeps the net carb count at just 5g per slice.  And you only need 7 ingredients to make it.  You’ll need cream cheese, sour cream, pumpkin puree, a sugar-free sweetener, eggs, pumpkin spice and vanilla extract.

What’s the best way to cut this pumpkin cheesecake?

There are two ways.  The first is with a large hot knife that you clean after each cut.  Have a tall glass of hot water next to you and dip the knife into it after every slice.  Dry the knife with a kitchen towel and make the next cut.  The second way is to use a long piece of unflavored dental floss .  You wrap the floss around your fingers press down through the cheesecake as if it were between your teeth and then let go of one end and pull it back through.  It’s kind of genius, actually.

Ok, time to wrap it up, but first there is one more thing I should mention.

And that is how close this Keto Pumpkin Cheesecake is to the regular sugary kind.  You can bring this sugar-free cheesecake to a party, leave it on the dessert table and then wait for people to come over and ask you for the recipe.  You could take that opportunity to reveal that it’s actually the dreaded “low carb diet food”. Try not to gloat too much.

But, like Mr. Frank Sinatra always used to say:

Keto Pumpkin Cheesecake is king of the hill, A #1, head of the heap! 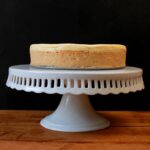 Step 1.  Preheat oven to 200 degrees F and grease a 9 or 10-inch springform pan on all sides. Place the bottom of the pan on a piece of parchment paper and run a pencil around the outer edge to draw a circle.  Cut out the circle.  Lock the walls of the pan to the bottom and stick the parchment circle to the pan bottom.*

Step 3.  Add pumpkin mixture to the springform pan.  Smooth the top with a spatula.  Clean the mixing bowl, beater, and spatula well so that you can use them for the vanilla layer.

Step 5.  Carefully spoon the vanilla batter on top of the pumpkin layer and smooth it with a spatula.  Set aside for 10 minutes until air bubbles rise to the top.  Use a spatula to pop and smooth out the little bubbles that have risen to the surface of the cheesecake.

Step 6.  Bake cheesecake on the lower rack of the oven for 45 minutes. Remove cake from oven and use a toothpick to pierce any more bubbles that have risen to the surface. Return to the oven and continue to bake until the top is firm and no longer jiggly, and the internal temperature reaches 165 degrees F, 2 ¼ to 2 ¾ hours longer.

Step 7.  OPTIONAL STEP:  If you like a cheesecake with browned top, you can remove the cheesecake from the oven and increase the temperature to 500 degrees F.  Then return the cheesecake to the upper shelf of the oven for 4-12 minutes until bronzed on top.***

Step 9.  Cover the pan in plastic wrap and refrigerate until cold and firmly set, at least 6 hours.

Step 11.  Let the cheesecake stand at room temperature for about 30 minutes before serving. To slice, dip a large sharp knife in very hot water and wipe dry between cuts.  Or use a long piece of unflavored dental floss and press down through the cake and then let go of one end and pull it back through.

*The easiest thing to do is to remove the sides of the pan and leave the cheesecake on the bottom piece of the pan.  If you plan to to this, then you can skip lining the bottom of the pan with parchment paper.

**I usually add in some orange food coloring to make more of a contrast between the two layers, but this is optional.

***I do not recommend browning the cheesecake.  I think it looks nicer with a smooth, light colored top.  Plus, this last step could leave the cheesecake burnt, spotty or cracked.  Too risky.