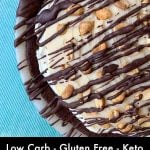 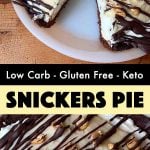 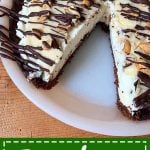 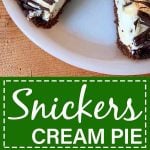 This low carb and Keto recipe is for a decadent chocolatey Snickers pie with only 4g net carbs per slice. It’s a sugar-free dessert that you would never guess is sugar-free.

“Snickers is a brand name chocolate bar  consisting of nougat topped with caramel and peanuts that has been enrobed in milk chocolate.”

Today I’m going to share a recipe for Keto Snickers Pie.  Will it be “enrobed in milk chocolate” like the original?  Well, no.  Not exactly.

But we will drizzle it with sugar-free dark chocolate, how’s about that?

This super tasty low carb dessert has a chocolate crumble crust, followed by a vanilla cream filling, then topped with roasted peanuts and drizzled caramel and chocolate.

It is, if I do say so, pretty spectacular.

My mom came by as I was doing all the sprinkling of peanuts and drizzling of chocolate and caramel and whatnot.  She snuck some bites of all the leftover ingredients and was like, “This is good.  Like, really really GOOD.  And this is sugar-free?”

Yep, sugar-free and you can’t tell the difference at all.

I used both granular and powdered Swerve for this recipe, because it is a zero calorie, zero net carb sweetener that has no effect on blood sugar.  Here are the other ingredients that you’ll need to make this Keto pie:

And it is not technically a no-bake pie, because you bake the crust.

But it feels like a no-bake pie, because it’s got a crumble crust and the filling is uncooked.  It’s a light and fluffy cream pie filling topped with the aforementioned peanuts, caramel and chocolate.  And it only takes 10 minutes to bake the crust, so it’s pretty darn quick.

So Snickers pie is one of my go-to party desserts.

I leave it on the dessert table, and just wait for people to ask me for the recipe.  Do I gloat when I tell them that it is actually sugar-free?  I might, just a little bit.

But at only 4g net carbs per slice, this sugar-free pie deserves a little crowing! 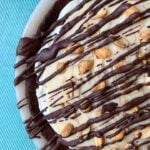 This low carb and Keto recipe is for a decadent chocolatey Snickers pie with only 4g net carbs per slice. It’s a sugar-free dessert that you would never guess is sugar-free.

2.  Place almond flour, sweetener and cocoa powder in a food processor or blender.  Pulse to blend. Add the vanilla extract and butter and blend until the mixture comes together to form a dough. Transfer the dough to the pie pan and press the dough evenly into the bottom and sides of the pan.  Use a fork to add holes in the crust for the steam to escape.

4.  As the crust is cooling, make up the caramel sauce.  Add the butter for the caramel sauce to small sauce pan.  Cook over medium heat until golden and just boiling.  Add sweetener to the pan, turn heat down to low and simmer for 1 minute.  Add vanilla extract and heavy whipping cream and stir well.  Set aside to cool and thicken, about 1 hour.  If it separates, just mix it until combined again.

5.  Add filling cream cheese, vanilla extract and sweetener to a large bowl and whip with an electric mixer until light and fluffy.  Add in cream and whip until hard peaks form.  Store in the refrigerator until ready to use.

6.  Fill the cooled crust with the filling mixture.

7.  Microwave chocolate chips, sweetener and coconut oil in 30 second increments until melted and combined, about 90 seconds.  Allow to cool for a few minutes.

9.  Refrigerate until serving, and store leftovers in the refrigerator or freezer.

STEP-BY-STEP PHOTOGRAPHS ARE BELOW THE RECIPE

If you liked this pie, then you might like my recipes for Chocolate Silk, Peanut Butter or Jello Cream Pie.