This recipe for Gluten Free Keto Strawberry Jello Cream Pie is the perfect summertime dessert. And each slice has just 4g net carbs.

Today I'm going to share a recipe for Keto Strawberry Jello Cream Pie, but first I want to show you something funny. It's a commercial for Sugar-Free Jello from back in the day. This was back when Sugar Free Jello started using this brand new sweetener called NutraSweet.

This lead to a renewed interest in Jello, and some extremely happy aerobic dancers.

But you have to admit, the old Jello commercials make some good points.

Jello really is one of the easiest desserts you can make. And luckily for us, Sugar-Free Jello has just 5 calories and zero carbs per serving, so it's low carb and Keto compliant to boot. And did I mention that it's Gluten-Free?

This recipe is based on a classic easy Jello Pie that uses a pre-made graham cracker crust and a mixture of Jello and Cool Whip.

But when you are doing low carb, almost nothing is this simple. Both Cool Whip and ready-made crusts are full of sugar and therefore off limits. So for this low carb Jello cream pie, I used a great faux graham cracker crust from the gnom-gnom blog.

And I used Jello because it's a quick way to get a robust Strawberry flavored filling.

Then you fill it with a mixture of Jello, cream cheese, heavy whipping cream and erythritol and top it with whipped cream.

And soon you'll have a slice of Keto Strawberry Cream Pie with only 4g net carbs. 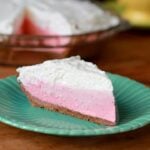 This recipe for low carb and Keto strawberry Jello cream pie is the perfect summertime dessert.  And each slice has just 4g net carbs.

1.  Pre-heat oven to 350 degrees F and spray a pie pan with cooking spray.

4.  In a medium sized bow, mix together almond flour, cinnamon and salt.  Add melted butter and stir until fully combined.

5.  Press the graham cracker crust into the bottom and up the sides of the pie pan.

7.  Put the crust into the freezer to cool until you need it.

9.  Add softened cream cheese and Jello mixture to a large bowl and beat using an electric mixer until fully combined.  Chill in the refrigerator until needed.

10.  Add cream and remaining ⅓ cup powdered sweetener to a clean large bowl and whip with the electric mixer until soft peaks form.  In a small bowl, mix together unflavored gelatin and 2 tablespoons warm water until smooth and dissolved.  Beat the gelatin into the whipped cream until stiff peaks form.

11.  Fold half of the whipped cream into the Strawberry Jello mixture and add to the pie pan.  Smooth the top with a spatula.  Add remaining whipped cream on top of the pie.

*If you take this pie to a party, make sure to clearly mark that it contains nuts.  Most people don’t expect a pie to use almond flour, so people with nut allergies might inadvertently eat it.

If you liked this low carb pie, then you might like my recipes for French Silk Chocolate, Banana Cream or Lemon Meringue Pie.