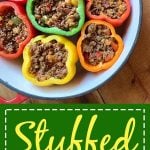 This recipe for Keto stuffed bell peppers is a homey meal with just 258 calories and 7g net carbs per serving.  It's colorful and full of flavor.

“You can’t always get what you want, but if you try sometimes, you might find, you get what you need.” -the Rolling Stones

I’ve had this song in my head all morning as I cooked up these Keto stuffed bell peppers.  Why?  Well, it has to do with Christopher Columbus, if you can believe that.

We all know that he discovered America as he was looking for India.

Well, it turns out, he found something else while he was at it.  He was searching for black peppercorns (which were kind of a big deal back then) and came up empty.  But he did find these vegetables that looked like hot peppers, but with a bell shape.  So he called them bell peppers, and the name stuck, so now we all call them bell peppers.

And we stuff these bell peppers with delicious fillings and bake them up.

There are endless ways to fill stuffed bell peppers, but today we’re going to stick to the classic American version of the dish, which is a bell pepper, filled with ground meat, tomatoes and rice, and baked in the oven.  And because it’s low carb, we’ll swap out the rice with cauliflower rice.

So first off, you’ll need 7 bell peppers, of any color.  Green ones are on the bitter side, but will mellow out the longer you bake them.

And for the filling, you’ll need olive oil, ground meat (beef, pork, chicken or turkey can be used), garlic, tomato paste, a can of diced tomatoes and chilis, cauliflower rice, shredded cheese, paprika, salt and pepper.

HOW DO YOU MAKE KETO STUFFED BELL PEPPERS?

First you brown your meat, along with your garlic, paprika, salt and pepper.  Add in the tomatoes and chilis, cauliflower rice and tomato paste and saute.  You hollow out the bell peppers and arrange them in a dutch oven.  Stuff them with the filling, cover them and bake for 30-50 minutes, depending on how soft you like your stuffed peppers.  Top the peppers with shredded cheese and cook them uncovered for another 10 minutes until the cheese is nice and melty.

They’ll last for 5 days in the fridge or up to 3 months in the freezer.  Just make sure to allow the peppers to completely cool down before adding them to resealable containers and storing them.

HOW DO YOU REHEAT KETO STUFFED BELL PEPPERS?

The best way to reheat stuffed peppers is in the oven.  Put them into a baking dish and cook them in a 350 degree F oven for 10 minutes.  You can also reheat them in the microwave for 2-3 minutes.  But you should wrap the peppers in a wet towel before you microwave them, so that they don’t dry out.

You can be as creative as you like with the fillings, so long as you stick with low carb ingredients.  (So no, you can’t use white rice like everyone else in the non-Keto world.)  But you know what Christopher Columbus always used to say? 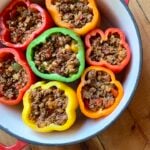 This recipe for Keto stuffed bell peppers is a homey meal with just 258 calories and 7g net carbs per serving.  It's colorful and full of flavor.

1 (15oz) can of diced tomatoes and chilis

2.  Hold the bell peppers firmly with one and and carefully slice of the tops.  It's easy to get cracks in the peppers as you slice them, so take care.  Remove the seeds and white membrane from inside the peppers.  Remove the stem and small dice the top of each pepper until you reach 1 cup diced peppers.

3.  Heat olive oil over Medium High heat in a large skillet.  Add ground beef, salt, pepper and paprika to the pan and cook, breaking up the pieces with a spatula until browned, 5-7 minutes.

4.  Add garlic and diced peppers to the pan and saute until softened, 4-5 minutes.

5.  Add cauliflower rice, tomatoes and chilis, and tomato paste to the pan and cook for 5 minutes more.

6.  Arrange the bell peppers in the dutch oven or casserole dish.  Fill the peppers equally with the filling.

7.  Cover with the lid and cook for 30-50 minutes, depending on how firm you like your stuffed peppers.  After 30 minutes, they will be cooked but still firm, and after 50 minutes they will be quite soft.

8.  Uncover the baking dish and sprinkle cheese on top of each stuffed pepper.  Cook uncovered for 10 minutes more, until the cheese is melty.

IF YOU LIKED THIS LOW CARB GROUND BEEF RECIPE, THEN YOU MIGHT LIKE MY RECIPES FOR Chili con Carne , BEEF TAMALES OR MEATLOAF.