This Keto Peanut Butter Pie recipe is a zero sugar version of a classic Southern cream pie.  And each slice has just 296 calories and 2g net carbs.

I've been thinking about that old commercial for Reese's Peanut Butter Cups as I made today's Keto Peanut Butter Pie recipe.  Apologies in advance for sharing this brain worm.

What is Peanut Butter Pie?

Traditional Peanut Butter Pie is made using creamy peanut butter, cream cheese, powdered sugar and heavy cream.  These ingredients are whipped together and poured into a baked flour-based pie crust.  It makes for a very decadent peanut butter dessert.

The history of Peanut Butter Pie is a little bit murky, but it seems to have originated in the American South in the late 1800’s or early 1900’s.  (The South was lousy with both peanuts and pies at that time, so this theory checks out.)  But it couldn’t have happened without the efforts of George Washington Carver, champion of the peanut.  While he didn’t actually invent peanut butter, he definitely gave it a push into popularity.

Classic Peanut Butter Pie is chocked full of sugar and white flour, so no, it’s not Keto friendly.  But fear not, I’ve got a recipe for Keto Peanut Butter pie that uses erythritol for its sweetener and almond flour for the crust, so my version has just 2g net carbs per slice.

What’s in this low carb take on Peanut Butter Pie?

This pie has a baked chocolate crumble crust made with cocoa powder and almond flour, and a creamy filling made from peanut butter, cream cheese and whipped cream.  Drizzle some chocolate on top and you've got a truly fabulous Keto dessert.

Is it a no-bake pie?

Yes and no.  I could technically call it a no-bake pie because you don’t cook the filling, but you do need to bake the crust… so it’s a toss up.  It’s very easy to make, in any case.

What can you eat with this Sugar Free Peanut Butter Pie?

Peanut Butter Pie is often topped with whipped cream.  You might also want to serve it with a scoop of Sugar Free Ice Cream.  Decorate the top with a drizzle of chocolate or caramel and you’ve got a great thing going.

When you combine peanut butter and chocolate, you really can’t go wrong.

Because chocolate and peanut butter truly are "two great tastes that taste great together". 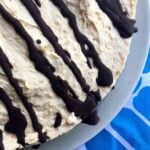 This recipe for Keto Peanut Butter Pie is a decadent dessert with only 296 calories and 4g net carbs per slice.

Step 2.  Add butter to a medium-sized bowl and melt in the microwave.  Once melted, add the almond flour, cocoa powder and sweetener. Mix well to combine.

Step 3.  Transfer the crust mixture to the prepared springform pan. Use your fingers to spread the crust so that it covers the bottom of the pan.

Step 4.  Using a fork, poke some holes in the crust to allow air to escape.  Bake for 10-12 minutes until set.  Allow to cool completely before making the filling.  The pie crust will harden as it cools.

Step 5.  Add the ½ cup heavy whipping cream to a large bowl and whip with an electric mixer until soft peaks form.  Set aside.

Step 6.  Add filling powdered sweetener, heavy whipping cream, and vanilla to a large bowl and mix with the electric mixer.  (No need to clean the blades.)  Add in softened cream cheese and peanut butter and mix on High until light and fluffy.

Step 7.  Carefully fold the whipped cream into the peanut butter mixture.  Add the filling to the cooled crust.

Step 8.  Chill for 1 hour in the freezer until completely cooled.

Step 9.  Remove the spring form pan and parchment paper.  (You can leave the bottom of the pan in place.)

Step 10.  Whisk chocolate topping ingredients together and drizzle over the pie.

Step 11.  Chill for 15 minutes in the freezer until chocolate hardens.

Step 12.  Store in the refrigerator.

If you liked this pie, then you might like my recipes for Chocolate Silk Pie, Snickers Pie or Pumpkin Pie.