Do I have a healthy cucumber salad recipe to share with you today. It's a little bit tangy, and a little bit sweet, and it makes for an all around classy Keto salad.

What is Cucumber Salad and where did it come from?

Cucumber Salad is a sliced cucumber and onion salad with either a tangy vinaigrette or a sour cream and dill dressing.  It comes from 17th Century Germany, and used to be served warm, if you can believe that.  That version of the recipe didn’t have legs, but the cold preparation of Gurkensalat is enjoyed to this day.

Cucumbers are decidedly Keto, so yes, Cucumber Salad is low carb too.  I’m going to share a recipe for a vinaigrette version of the classic recipe rather than the sour cream dill version, but you can find a great recipe for Creamy Cucumber Salad on Wholesome Yum.

What are the ingredients in this tangy Keto Cucumber Salad?

How do you make this low carb Cucumber Salad?

And you are done.

It’ll take a little over an hour from start to finish, but soon you’ll have a healthy Keto Cucumber Salad with only 230 calories and less than 1g net carbs,

All thanks to the might low carb power of the cucumber. 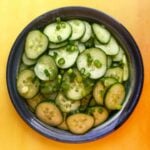 This recipe for low carb tangy cucumber salad is a great side with only 2g net carbs. It's basically a free food.

2.  Place the cucumber slices in a colander over a bowl or sink. Sprinkle them with a couple shakes of salt, toss to coat, and let them rest for about 30 minutes, then pat them dry with a paper towel.

4.  Mix cucumber and scallions with dressing and refrigerate for at least 30 minutes so that the flavors meld.

5.  Can be stored for up to 3 days in the refrigerator.

IF YOU LIKED THIS SALAD RECIPE, THEN YOU MIGHT LIKE MY RECIPES FOR GERMAN POTATO, WEDGE OR Spinach Salad with Warm Bacon Dressing.