In my house, we have a saying.

When the kids are scrounging around in the fridge, and fussing that there is nothing to eat, we say “Well kids, there’s always cereal.”  And I’ll be honest, this rarely stops the fussing, but it really ought to.  My kids aren’t on a low carb diet like I am, so they don’t know how good they have it.

My kids can bust out a box of that addictive Cinnamon Toast Crunch and go to town.

But fear not- I’ve come up with a low carb workaround.  It’s a little more complicated than just opening a box, but soon you’ll have a delicious bowl of crispy, cinnamon, and sweet breakfast cereal.  And unlike regular oh-so-tempting Cinnamon Toast Crunch cereal, this Keto version has less than 1g net carbs per bowl.

But I think I should address the elephant in the room.

Or the pig, to be more accurate.  That’s because the main ingredient of this Keto Cinnamon Toast Crunch is pork rinds.  Yes.  Pork rinds.  But stay with me on this!  They have the perfect texture for crispy cereal and with enough cinnamon and sweetener, you won’t taste the pork rind flavor at all.

And you’ll want to find a good milk substitute to pour over the cereal.

Regular milk is off-limits when you are on a low carb diet because it’s full of sugary lactose and has 12g of carbohydrate per cup.  But you can use low carb almond or coconut milk.  Or you can make your own dairy milk by watering down heavy whipping cream and adding a little sugar-free sweetener.

You can mix up this crispy low carb cereal in two shakes of a lamb’s tail.

Start by making a simple caramel sauce.  Mix it up with a bag of pork rinds that have been cut into bite-sized pieces.  Lay the cereal out on a parchment-covered cookie sheet and sprinkle with cinnamon and sweetener.  And you are done. 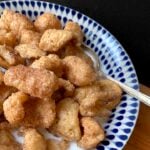 Step 1.  Cut the pork rinds into ½-1 inch pieces and place in a large bowl.  Cover a large cookie sheet with parchment paper.

Step 2.  Add butter to a medium-sized saucepan and heat over Medium heat until browned, 4-6 minutes.  Stir occasionally until minute 3, and then constantly until it becomes a medium brown.

Step 4.  Use a rubber spatula to fold the caramel sauce into the bowl of pork rinds, mixing until all surfaces are coated.

Step 5.  Arrange the pork rinds on the parchment-covered cookie sheet and sprinkle with ⅓ of the cinnamon sugar mixture.  Mix it up and repeat 2 more times until all surfaces are covered in the sprinkled sweetener.

Step 6.  Leave on the counter until cooled.  Can be stored in an airtight container at room temperature for 3-4 days.

Where to buy Allulose or Swerve 💰 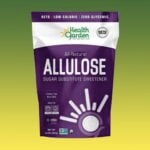 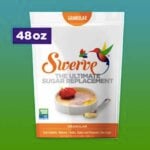 IF YOU LIKED THIS LOW CARB BREAKFAST RECIPE, THEN YOU MIGHT LIKE MY RECIPES FOR CAULIFLOWER EGGS BENEDICT, KETO WAFFLES, OR KETO BISCUITS WITH SAUSAGE GRAVY.