This Keto German Potato Salad recipe uses cauliflower to stand in for potatoes. It’s a great Teutonic side dish with only 3g net carbs per serving.

Today we are going to make a Keto version of German Potato Salad.  And because potatoes are off limits on a low carb diet, we're going to turn to our good friend the cauliflower.

But first things first, what is German Potato Salad?

German Potato Salad is a traditional potato side dish originating in Southern Germany.  It’s a blend of cooked potato cubes, onions and bacon bits in a Dijon mustard dressing.

Do you eat German Potato Salad hot or cold?

Why not… both?  You can eat it hot, right after the ingredients have been cooked, or you can chill it in the refrigerator and eat it cold.  The temperature of your German Potato Salad is completely up to you.

It’s made from potatoes, so that is a no.  But if you substitute the high carb tubers with low carb cauliflower, then the carb count for this dish goes down to 3g net carbs per serving. Das ist gut.

What are the ingredients in this Keto German Potato Salad recipe?

Do you have to use cauliflower?

No, you can use an alternate low carb vegetable from the radish family.  You can substitute either small regular radishes or Daikon radish cubes.  You coat the radishes in olive oil and bake them in a 400 degree F oven for 25-30 minutes until tender, stirring halfway through.

This Keto German Potato Salad is easy to throw together.

First you roast a head of cauliflower for about 20-25 minutes in a 425 degree F oven.  Then you saute some bacon until it's nice and crispy.  Cook some onions in the bacon grease, and then you are ready to put the salad together.  Mix the cauliflower up with the bacon, onions and a simple Dijon mustard vinaigrette and you are good to go.

You'll have a Keto German Potato Salad with only 174 calories and 3g net carbs per serving. 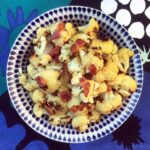 This Keto German potato salad uses cauliflower to stand in for potatoes. It's a great side with only 3g net carbs.

1.  Preheat oven to 425 degrees F and spray a cookie sheet with cooking spray.

2.  Place cauliflower florets onto cookie sheet in a single layer and spray with cooking spray.  Sprinkle salt and pepper on the cauliflower.

4.  Cook bacon in a large skillet over medium heat until crispy.  Remove to a paper towel covered plate to drain.

5.  Saute onions in the bacon grease until browned.

7.  Mix together cauliflower, onions, bacon and dressing in a large bowl.

8.  Serve warm or refrigerate for at least 1 hour before serving cold.

If you liked this salad recipe, then you might like my recipes for Caprese Skewers, Wedge or Tangy Cucumber Salad.