This Sweet Cinnamon Pork Rind recipe might sound a little weird, but add a little cinnamon and sweetener to pork rinds and suddenly you’ve got an addictive, zero carb, Keto snack.

I’ve got a confession to make.

While I love low carb snacks in almost any form, I have never taken to pork rinds.  I know that a lot of low carb and Keto dieters love them, but they just aren’t my cup of tea.

Until I came upon a recipe for sweet cinnamon pork rinds on the This Little Light of Mine blog.

All you need to do is cover the pork rinds in butter, and roll them in cinnamon sugar and presto!  They go from a yuck to a total yum.

So here are the four ingredients:

And the cooking method could not be any easier.

You pour the pork rinds into a resealable gallon size plastic bag.  Then add melted butter and shake to coat.  Add cinnamon and (sugar-free) sugar and shake.

And you are done.

In two shakes of a lamb’s tail, you’ll have a salty, sweet, crispy snack.

And did I mention that this recipe has zero net carbs?  The only carbs come from the cinnamon, so yea.  Basically zero carbs.  Now I am so happy to be on board the pork rind train. 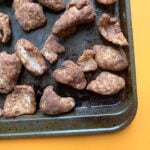 Add a little cinnamon and sweetener to pork rinds and suddenly you’ve got an addictive, zero carb, Keto snack.

2.  Pour melted butter in and shake to coat.

3.  Mix cinnamon and sweetener together in a small bowl.  Pour into the bag and shake until coated.

4.  The pork rinds will lose their crispness over time.  To crisp them back up, place them under the broiler for a few minutes.

OF YOU LIKED THIS SWEET PORK RIND RECIPE, THEN YOU MIGHT LIKE MY RECIPES FOR MUDDY BUDDY MIX,  CARAMEL KETTLE CORN OR CHOCOLATE COVERED PORK RINDS.