This guide explains the ins and outs of low carb Lupin Flour: what it is, where it comes from, and how to use it in Keto cooking.

Lupin Flour is a legume flour that can be used in low carb baking.

This high protein, high fiber flour is made entirely from the Sweet Lupin Bean. Sweet Lupin Beans are closely related to peanuts and soybeans.  Lupin is low in fat, low in the Glycemic Index, gluten-free, contains minimal starch, and has been shown to lower blood pressure and cholesterol and improve insulin sensitivity.

Where do Lupin Beans come from?

You find Lupin, aka Lupina, Beans in the Mediterranean and Latin American countries where they are often pickled and eaten as snack food.  But Lupin Beans have been consumed for centuries and have even been found in Egyptian tombs.  (Who knew that the pharaohs were on Keto?)

Are there any allergins in it?

Yes, the Lupin Bean is a legume that is closely related to peanuts and soybeans.  So people with nut or soy allergies should steer clear.

Is it low carb?

Boy howdy is it low carb.  Each ¼ cup serving has just 1g net carb.  Compare that to the more commonly used almond flour, which has 3g net carbs (and 50% more calories!). So yes, Lupin Flour is very low in carbohydrates.

Lupin Flour is “Keto-friendly”, let’s put it like that.  The Lupin Bean is a legume, so is not allowed if you are doing Strict Keto.  But Lupin Beans exist in a gray area, along with peanuts and soybeans.  Keto dieters can usually eat them without any spike in blood sugar.

I’m not going to lie.  On its own, the taste is pretty funky.  Sort of like a very bitter bean sprout that has been made into powder.  But when you add other ingredients and cook it, the bitter taste fades away to nearly nothing.  Be sure to up the sweetener and seasonings though, to be sure to mask the bitter taste.

How to use Lupin Flour

It has only been widely available for a relatively brief amount of time, so it’s still the Wild Wild West in terms of what people use this flour for.  There are not a lot of recipes out there, but here are some highlights:

Where to buy Lupin Flour

All lupin flours are 100% Lupin Beans, so it doesn't matter terribly much which one you choose. But here are the top 4 brands: 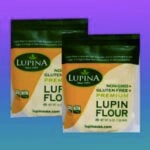 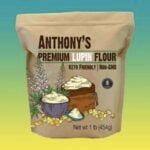 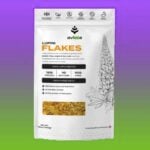 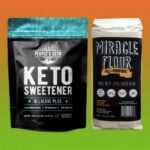 So that's the skinny.

It’s a low carb, grain-free, vegan, high fiber, high protein, raw food, gluten-free flour that has endless possibilities.  If you come up with your own recipes, then I would love it if you’d share them in the comments.  So let's go!